Part 2: Going Down the Road

( Note: All page numbers are from the Signet "The Bachman Books" paperback, unless otherwise noted. ) 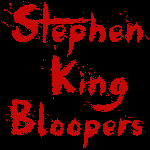