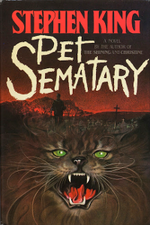 1. "Rachel had wanted to get Church spayed, had even made the appointment with the vet."... You can't spay a male animal, only neuter. To spay is to remove ovaries; males don't have ovaries. Louis later refers to neutering when making a note to himself to call for the appointment (Chapter 10 pg. 49).

( Note: All page numbers are from the Signet paperback, unless otherwise noted. )