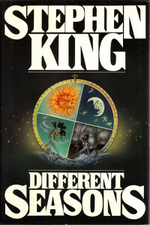 In the story within the story, Chico's brother is killed by a Ford Mustang, but the first Mustang appeared in 1964, while The Body is set in 1960.

David tells the reader that the first Christmas story he heard at 249 was the one Gerard Tozeman told, but a few pages before he mentions that he is listening to Peter Andrews telling his Christmas story.

( Note: All page numbers are from the pub hardcover paperback, unless otherwise noted. )