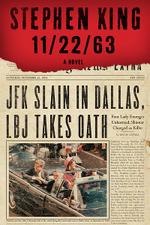 Part III -Sadie and the General[]

Throughout, King refers to Dallas and For Worth as being in Central Texas -- they are not. They are in North Texas or North Central Texas. Central Texas would be from roughly Waco to Killeen. (Also, how does he go get condoms in Killeen and go to fictional Jodie, then Dallas so easily?)

( Note: All page numbers are from the Scribner hardcover First Edition, unless otherwise noted. )